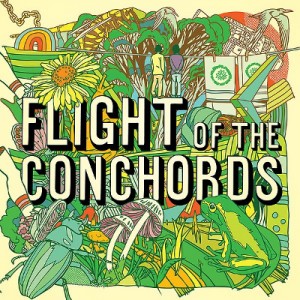 Album: Flight of The Conchords
Year: 2008

In fact — outside of Weird Al, who transcends time and space — there seems to be only one group/troup/performer each decade who crank out at least an album’s worth of funny songss: The Fugs in the 1960s, National Lampoon in the 1970s, Spinal Tap in 1980s, Tenacious D in the 1990s and Flight of the Conchords in the 2000s.

Buoyed by an HBO show that showcased the deadpan smarts of Bret McKenzie and Jemaine Clement — and featured Rhys Darby’s turn-for-the-ages as Murray (“present!”), their enthusiastically clueless manager and Kristin Schall’s stalkery fan, Mel — Flight of The Conchords turned Flight of the Conchords into instant cult heroes.

And while the songs were somewhat uneven, the best ones were absolutely stunning, like the absolutely loopy “Robots,” sung from the perspective of our new overlords.

It is the distant future
The year 2000
We are robots
The world is quite different ever since the robotic uprising of the late 90s.
There is no more unhappiness.
Affirmative
We no longer say ‘yes’. Instead we say ‘affirmative’.
Yes – err – affirmative.

Of course, “Robots” simultaneously plays upon our existential fears of the inevitable robot uprising, while getting laughs out of what on the surface is a horrific extinction event.

Of course, the other running joke in “Robots” is that this song sung by robots who have destroyed humanity is basically a folk-rock song, as opposed to a techno song. Which adds an extra punch to the joke you’ve all been waiting for the second you read the word “Robots” in the title of this post:

Of course, this is epic silliness, on the level of the best of Spinal Tap or MST3K or Monty Python, and isn’t for everybody. But naturally, I find it hilarious, and really need to do a rewatch of Flight of The Conchords, stat.

“Robots” from the Flight of The Conchords HBO Show
https://www.youtube.com/watch?v=B1BdQcJ2ZYY

(I don’t know why this won’t play in the post, but I assume that the robots had something to do with it.)