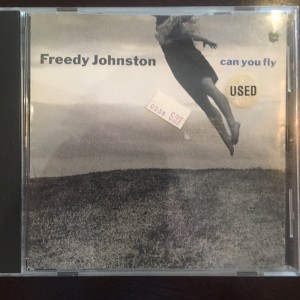 The very dictionary definition of a cult artist, Freedy Johnston has been making great records for nearly 25 years now, starting with 1992’s Can You Fly, one of the best albums in one of my favorite years of music.

The legend surrounding Can You Fly is that Freedy Johnston sold his inheritance in order to finance the recording of the album, and the reason it’s a legend is that Freedy turned around and wrote his best song about that decision.

That’s how “Trying to Tell You Don’t Know” starts, just Freedy’s unique Neil-Young-as-a-baritone voice over his chugging electric guitar, but as the band — featuring Joe Jackson’s crack bassist Graham Maby, and secret guitar hero Kevin Salem — kicks in, the tempo ups, and the song gets tougher, along with the circumstances:

Yeah, technically, this is singer-songwriter stuff, but as Salem’s guitar solo kicks in, it feels like they’ve been playing together for centuries, and in the end, drummer Brian Doherty kicks the song into double-time and with organist Knut Bohn continually helping out with “trying trying,” Freedy sings the title over and over and over until he can get across just how much the decision to sell the farm took out of him.

Can You Fly was also an album that I got the exact same used copy two different times. I don’t even remember where the first time was, but it had a very distinct “Used” sticker, as well as someone had punched a hole in the cover in the shape of a spade.

You can see it at the top of this post.

Anyways, at some point after I bought it, someone broke into my apartment in the Tower District and stole a whole shelf’s worth of CDs. Like they came in, grabbed the CDs and just booked out my front door, which was conveniently located next to my CD case.. One of those CDs was Can You Fly. I knew who the thief was and reported it to the police, of course, but there really wasn’t much I could do about it, as petty theft isn’t high on the list of things that the Fresno PD worried about in the Tower in the early 1990s.

So I wrote those CDs off and figured that I would replace the ones I really loved eventually.

A few days later, I was shopping at Ragin’ Records, as I did, and lo and behold, there was my copy of Can You Fly sitting on the shelf. The thief had sold it there.

Of course, when I pointed this out to Paul, he just let me have it, because of course he did.

“Trying To Tell You I Don’t Know”