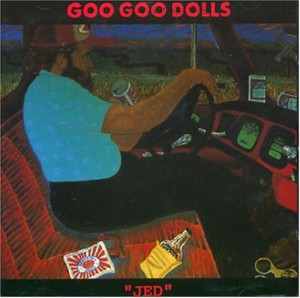 The result was a minor league Sorry Ma, I Forgot To Take Out The Trash, to be sure, but by the time I bought Jed in 1991, The Replacements themselves had slicked up for Don’t Tell A Soul and softened down for All Shook Down.

So I was looking for an album that at least aimed to capture some of that old ‘mats magic, and would argue that the Goo Goo Dolls got pretty damn close on things like “Up Yours,” “Had Enough” and my favorite song on Jed, “Road to Salinas.”

Sure, you’ve heard that rhythm guitar before, but when drummer George Tutuska starts double-timing halfway through the chorus underneath bassist Robby Takac’s agreeably rough vocals, it becomes irrestible punk-pop.

I don’t know why I drive behind the wheel
Sun’s the sky, and I was
On the road to Salinas
Down the road I thought could free us
Ordinary dreams would go
And I would always get back home

And after the third chorus, they punch in a lead guitar — you can practically hear the engineer sliding the fader up — and after meandering around a bit, the song stalls, threatening to fall apart, when suddenly Johnny Rzeznik uncorks a hell of a solo to take the song to its fade.

Of course, in no way, shape or form is any this essential, but it’s catchy and it’s fun, and sometimes that’s all that matters.