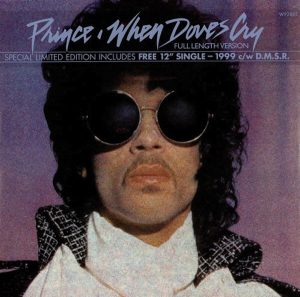 A dance song with no bassline? Check.

A single that was #1 for over a month but also almost six minutes long? Check.

Bringing his bandmates for a video of a song where he played all of the instruments? Check.

A fucksong with incredibly sad lyrics? Check. And mate. Lots of mate.

And that chorus, with its massive overdubbed Princes all singing in perfect harmonies, and the momentum moving ever forward pushed by a single keyboard was so completely overpowering that nobody gave a shit what “when doves cry” actually meant.

Also: all of those vocal interjections, the “whoos” and the “doobie do wahs” completely gloss over the fact that the song is basically a single groove and a single melody repeated over and over and over and over driven by that damn electronic drum that sounds like random gunshots.

But Prince masks that fact by adding and subtracting instruments and vocals so masterfully that when he breaks it down near the end, it’s almost a shock.