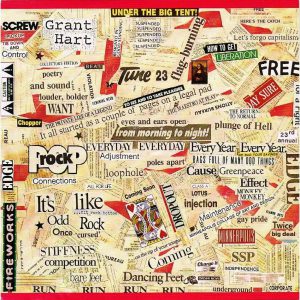 Both Grant Hart and Bob Mould released solo albums in 1989, and both albums were surprising in that they completely abandoned the ferociously melodic punk rock that that Hüsker Dü had pioneered.

So while Mould’s Workbook featured precise, acoustic-oriented songs, Hart’s Intolerance was full of big, ramshackle arrangements, piling on the keyboards and whatever else was lying around the studio that day.

Both albums had their charms and their confessions, but while Workbook was an anomaly for Mould, who soon returned to the roaring guitars, Intolerance set the template for much of the rest of Hart’s solo career.

And the best song on either record was Hart’s unnervingly frank tale of heroin addiction, “The Main.”

Over a waltzing piano and organ that feels like a lifeline, Hart sings:

Well, it sinks to the bottom or floats to the top
I avoided policemen when I went to cop
She sang one two three, one two three, come get it now
And I took just as much as my brass would allow

Fucking chilling, but then a whole choir of Grant Harts come in for the chorus, which is half-gospel, half-sea shanty and completely devastating.

It didn’t matter where he went on that European tour. It didn’t matter that he was one of the most unique drummers who ever sat behind a kit, (I’ll get to that when I write about the Hüskers.) All that mattered was shooting smack, period.

This is a long way from feeling like Jesus’s son. And while I’ll give “Heroin” the nod for being the greatest song about heroin, “The Main” is way way up there, completely stripping all of the glamour away, and leaving only the emptiness and craving.

In fact, it felt like a miracle that Hart was even able to write and record such a beautiful song about his dissolution.

In the late 1980s, when Intolerance came out, my little tribe was probably as druggy as we were ever going to be, and while I decided when I was still a kid that I was never ever going to try heroin under any circumstances, a song like “The Main” was a stark reminder of why that was probably a good decision.