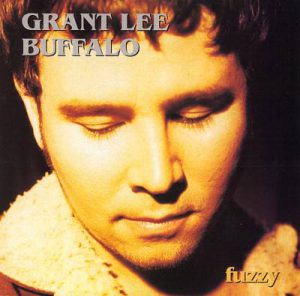 You young’uns who only know Grant-Lee Phillips as the Stars Hollow town troubadour in Gilmore Girls might be surprised that — for a short while in 1993 — Grant Lee Buffalo felt like the most important band in the world.

That’s because of the initial impact of their debut album Fuzzy, which somehow felt like the first album full of what Mike Scott of The Waterboys called “The Big Music” since The Waterboys abandoned the — well, “genre” is far too strong of a word but it’s all I got here — genre with Fisherman’s Blues.

And even more remarkable, Grant Lee Buffalo created huge anthems with mostly acoustic instruments, their secret being Grant-Lee Phillips electrified acoustic guitar, allowing him to go from gorgeous acoustic to howling electric in the blink of an eye.

That said, the song that most grabbed me was the all-acoustic “The Hook,” where it’s just picked acoustic guitar and brushes on a snare as Phillips starts:

But it was the chorus of “The Hook” that I was singing to myself at 3:30AM as I was walking home from some post-gig party — usually at that guy (I think) John’s house — in the Tower District, being sure to stay middle of the street so if anybody was going to attack me I might have a chance to outrun them.

The beautiful melancholy in Phillips’ voice as sang that chorus totally matched my mood then: 1992 had been an incredibly tumultuous year for me, and the spring of 1993 was considerably quieter, even as 30-year-old me had no idea what was going to happen next, which was somehow comfortable, frightening and sad all at the same time.

Of course, the seeds for my future were already being sown: I’d started seeing Rox, and I had bought my first personal computer, where the first thing I did was start connecting with other music fans from around the country, some of whom might be reading this post at this moment.

But of course, I had no idea about any of that, all I knew for sure was that Fuzzy was an album that hooked me by the crook of my neck.

I also remember seeing Grant Lee Buffalo — with The Miss Alans opening — at the CSUF Satellite College Union at some point after Fuzzy came out, and thoroughly enjoying them.