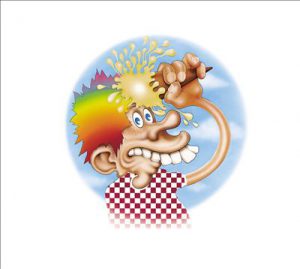 I saw The Grateful Dead three times in the 1980s. The first time was in February 1982 at Pauley Pavilion on the UCLA campus with Tim & Larry, though exactly why, I’m not sure, since most of my road trips around that time were to see folks that were higher in my personal pantheon, like The Who or The Kinks or Bruce Springsteen or Monty Python’s Flying Circus.

Guessing that Larry, who spent more time than anybody probably should have playing Dead music for me, had something to do with that one.

The next time was a few months later, as Tim & I saw them open the final day of the US Festival with a set that was advertised as “Breakfast with The Grateful Dead”.

Since I spent the entire US Festival subsiding on hot dogs & Coca-Cola, I kinda wish they had actually served breakfast during their set.

In any event, both shows were totally enjoyable, even if I was immune to having my mind blown. The final time I saw them was at the Oakland County Coliseum in the summer of 1987 the dire “Dylan & The Dead” tour in 1987.

The best thing about that show was that I got a totally cool Dylan shirt (with a picture of him that was on Biograph) that almost instantly shrunk on me, so I had to give it to my brother Joseph.

None of which has anything to do with this tremendous live version of “Sugar Magnolia” from the Europe ’72 triple-live album.

On American Beauty, “Sugar Magnolia” Bob Weir continues to chant “sunshine daydream,” as the song fades out, but on this live album, that section becomes almost an entirely new song, following an absolutely crackling full-band jam where every single member is firing on all cylinders.

Jerry Garcia’s solos have always gotten the brunt of the praise (and blame) when people talk about their long improvisations, but while his solo is utterly tremendous on this version of “Sugar Magnolia”, the whole band — especially pianist Keith Godchaux — are utterly smoking.

Hell, drummer Bill Kreutzmann gets so carried away he ends up double-timing his snare and actually ends the rave-up a measure too soon, but almost instantly catches himself and ends when everybody else does, a mistake they rightly left on the album.

After the audience starts cheering at the false ending, they leap back into “Sunshine Daydream” section, which is basically a repeat of the preceding jam, but now with Donna Godchaux singing “sunshine daydream” in imperfect harmony with Bob Weir. It’s so much fun that for a few minutes I take back everything bad I’ve ever even thought about hippies.