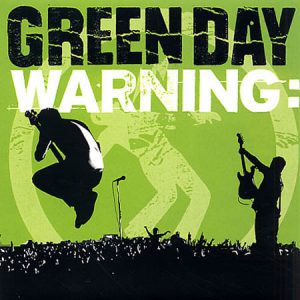 Once the mega-ballad “Good Riddance (Time of Your Life)” confirmed to Billie Joe Armstrong that he didn’t have to play by the loud fast rules anymore, Green Day followed it up with the Warning album, which featured three of best singles this stellar singles band have ever recorded: the wistful “Waiting,” the angry “Minority,” and my favorite of all, the Kinksy “Warning.”

Ray Davies got so much mileage from stealing riffs, it was fine by me for Billie Joe to acknowledge what was no doubt a key influence by stealing one of his.

Actually, two key influences: when he shouts out “Sanitation, expiration date,” it’s a clear shout-out to the Replacements “Waitress in the Sky,” as well. That said, the crazily catchy chorus was all Billie Joe.

When Warning came out I was dealing with the worst commute of my life — Oakland to to Sunnyvale, 40 miles in each direction — and one of the few memories I’ve allowed myself of what was basically 3 hours of hell every day was digging “Warning” every single time it came on Live 105 or the Warning CD I probably made from downloading the album from Napster. Because it was the fall of 2000, and everything was just about to change.

Though maybe not. I honestly don’t remember. But after Dookie, Insomniac and Nimrod I’d pegged Green Day as a singles band, and figured that the next album I would buy would be their greatest hits collection. Which, by the way was a good call, as International Superhits is probably their best album.

That said, in the fall of 2000, I had no idea just how many ideas that Billie Joe Armstrong was going to steal from Ray Davies, or how much everything was going to change in a relatively short period of time. I just knew I was going to continue to enjoy Green Day’s singles.