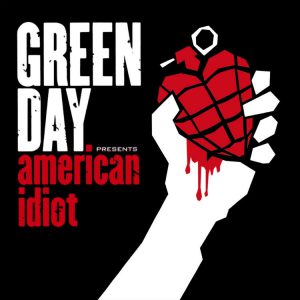 My favorite reactions were the “back-to-basics” Foxborough Hot Tubs album and the Demolicious compilation that came out after the Uno!, Dos! & Tre! albums, about which I’ve just now realized that I’ve only heard Uno! and disliked it enough to not bother with the other two.

In any event, none of this has to do with my favorite song from American Idiot, “Are We The Waiting,” which is less of a song than a piece of atmosphere combining two of my favorite things: a modified Phil Spector beat and punk rock football stadium chorus.

But I really love the way Billie Joe sings the verses with a weary resignation:

Starry nights, city lights coming down over me
Skyscrapers and stargazers in my head
Are we we are, are we we are the waiting unknown
This dirty town was burning down in my dreams
Lost and found city bound in my dreams

It’s really a neat trick for him to sing the words of the chorus all by himself over those Spectory drums and a lonely guitar in the middle of each verse, so when the guitars ramp up and the massive overdubbed vocals kick in during each chorus, it manages to keep the melancholy atmosphere of the song, which is part of why it’s my favorite Green Day song.

I mean, in the first wave of punk, the massive chorus vocals usually signified unstoppable power. The backing vocals on the choruses of “White Riot” or “Anarchy in the U.K.” helped make it seem that riots and anarchy had already started, and The Clash and The Sex Pistols were just capturing the sounds of England falling apart in real time.

But in the case of “Are We The Waiting,” it feels like Billie Joe has placed himself in the middle of a generation that is all stuck in the same place just standing around waiting for something to happen. And in fact, they’re not even sure that’s what they’re doing, so they just keep screaming the same question and futilely trying to answer it.

Fan-made video for “Are We The Waiting”