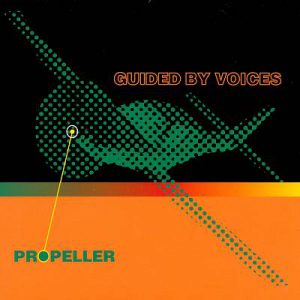 The big rock. The prog rock. The lo-fi. The pop hooks. It’s all here on nearly six minutes of poorly-recorded yet still transcendent bliss. “Over The Neptune / Mesh Gear Fox” might not be the longest song ever recorded by GBV, but it’s the longest of the 229 Guided By Voices songs that are in my iTunes.

Which means that it’s completely atypical — 175 of those songs are under 3:00, with the shortest weighing in at 0:18 — and that’s also part of their legend somehow.

The point being is that we’ve landed on a band I’ve loved for over 20 years now, and that 229 songs in my iTunes is what — a half?, a quarter? a hundredth? — of the songs they’ve actually issued.

Just like calculating Pi, it’s impossible to any device known to mankind to fully count how many songs that Robert Pollard has written and released. That’s also part of the legend.

Of course, none of that would even remotely matter without songs like “Over The Neptune / Mesh Gear Fox,” which connect in reality, as well.

Like during the “Over The Neptune” part when Pollard sings the chorus over chugging and churning guitars.

And hey, let’s throw the great party
Today for the rest of our lives
The fun is just about to get started
So throw the switch, it’s rock and roll time

After the second chorus, the guitars start heading for the stratosphere, seemingly unstoppable until they suddenly run out of steam and start tumbling back to Earth, but Pollard seems non-plussed, swimming in the middle of the tide below until the drums bring “Mesh Gear Fox” fully online, stately and anthemic.

And oh, mesh gear fox
Put out another bag of tricks from scientific box
Time’s wasting and you’re not gonna live forever
And if you do
I’ll come back and marry you
No use changing now, you couldn’t anyhow and ever

Like so many GBV songs, the lyrics con’t make complete linear sense, and yet the emotion with which Pollard invests “I’ll come back and marry you,” does make complete linear sense, so when the guitars — some combination of Mitch Mitchell, Jim Pollard and Tobin Sprout, no doubt — start squealing against each other until the fade, the whole thing feels like a rock ‘n’ roll fever dream that came creeping in from some other dimension.

What even was that? Oh right. The beginning of a legend.

“Over The Neptune / Mesh Gear Fox”