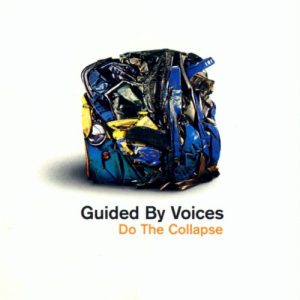 So on one hand, having abandoned the indie confines of Matador for the major-ish TVT and bringing a certified name producer whose name happened to be Ric Ocasek, Do The Collapse was clearly the Guided by Voices sellout album.

Especially since there was a whole two years between Mag Earwhig! and Do The Collapse. Gasp!

On the other hand, are you fucking kidding me? Despite the snoozy ballad “Hold On Hope,” Robert Pollard remained too idiosyncratic of a voice, his music too rooted in the past, his worldview too skewed sideways for any amount of spit and polish to breakthrough in the TRL era.

And for fuck’s sake, had songs like “Teenage FBI” or “Things I Will Keep” or even “Hold On Hope” become a bona fide hit single, that would have been so awful? I mean, imagine Robert Pollard being interviewed by Carson Daly in between Britney Spears and Blink-182 while teenage girls held “Teenage FBI” signs aloft and tell me that wouldn’t have been awesome.

Anyways, with former Breeders drum genius Jim MacPherson now powering the the whole band, Pollard finally had a drummer who could help him fulfill his fantasies of being The Who, so a song like “Things I Will Keep” was filled with rolls and builds and starts and stops on top of which Pollard sings some of my favorite Pollard nonsense.

But that doesn’t even matter, because as the guitars ebb and flow on top of those drums, sometimes playing licks, sometimes playing the melody line as a solo, sometimes just playing chords underneath Pollard’s vocals, “Things I Will Keep” always keeps you guessing as to where it’s going next, even as it sticks deep in your head.

“Things I Will Keep”