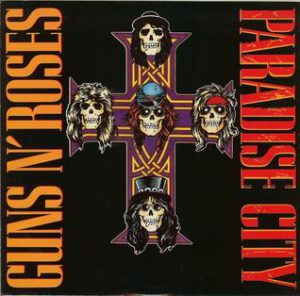 Has there ever been a more perfectly crafted stadium rock song? Especially when you consider that it was by a band that hadn’t even come close to playing stadiums?

Sure, I guess you could make a case for “We Will Rock You / We Are The Champions,” but Queen were already huge by the time time News of The World came out, and I still think that “Paradise City” is — at the very least — more relatable. After all, very few of us well ever be champions, but we all got a shot at paradise.

“Paradise City” announces its intent for raised lighters from the opening chiming guitars and kick…snare, kick-snare from Stephen Adler, before launching into not into it’s riff, or its verses, but its chorus.

Because sometimes you need to lead with what’s going to get 60,000 people singing in unison from the very start.

And not only did “Paradise City” open up with its utopian chorus, there were enough harmonies — including that wonderful low voice — to instantly stick the song deep in your head almost instantly.

After that, Izzy Stradlin starts playing some chords, and there’s even a synth hanging out, as Slash sends some guitar notes heavenward before launching into the supersized churning AeroZep riff that powers the rest of song.

“Paradise City” is unlike the rest of the mostly dour Appetite For Destruction, and sounds more joyous than anything else in their catalog. Though of course, Axl has to toss in his counterpoint during the bridge that the Paradise City is “so far away,” but luckily we’re all listening to Slash’s circular riff that’s running across that bridge so we’re not really worring about what Axl has to say.

Which, come to think of it, is a pretty good policy in general.

After that, it’s all about the chorus. Let’s all sing! And just to make sure everybody in the whole stadium gets their money’s worth, “Paradise City” pretends like its ending, but instead, spends it’s last minutes barreling towards the paradise city like they’ve got a legion of cops on their trail and if then can just get there, they won’t get arrested.

So with Slash powering the car with the energy coming soloing his ass off and the rest of the band singing the chorus over and over, “Paradise City” reaches its goal of being the greatest stadium song ever, and collapses at the end, spent and happy.