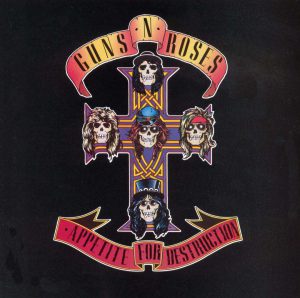 Right. This song. A number #1 hit single in 1988, which seemed a little weird even then, because it wasn’t like it as a slow power ballad, or even a conventional pop song that ended with the chorus repeating over and over again.

But what “Sweet Child O’ Mine” did have was loads of drama, and a weird seat-of-your pants feel to it that somehow connected deeply to just about anybody who heard it.

Of course, I could be reading too much into its origin story here. At this point who doesn’t know that Slash accidentally came up with that instantly familiar heart-rending riff while warming up, and Izzy Stradlin & Duff McKagan — especially Duff, whose bass during the opening is Mike Mills level of hook — encouraged him by working around it?

Not to mention the fact that Axl Rose was smart enough — or at least in a good enough mood — to write one of his more sappy lyrics around the whole thing. Right?

I mean, he could have just as easily been in a fight with Erin Everly and written the lyrics for “Back Off Bitch” that day, but instead she forever wins the “Greatest Love Song Written About A Specific Person Who Is The Daughter Of A Rock Legend” competition.

And adding to the seat-of-your pants feel of course, was the whole “where do we go from here” section, which even more than the forever riff or the lovely chorus, sealed the deal for the song, because that’s always the story of any relationship: what’s next? No one wants a dead shark on their hands.

Toss in Axl’s “hi-yiiides” and “mi-yinneees” and you got a song that rocks too much to be a power ballad, is too purty to be a straight metal song, with a guitar hook that Peter Buck or Johnny Marr could have written and an undeniable chorus that doesn’t get worn out.

It all adds up to a song that somehow became one of the most important things in the world during that awful summer of 1988.

Also: I still think the Miss Alans should have covered this, as I’m sure I kept telling them.