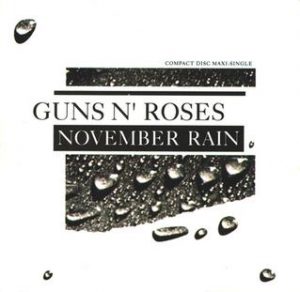 In the early 1990s, if you wanted to prove how big of an artist you were, it wasn’t about your riders or groupies or drugs or private planes.

And sitting on the top that they were constantly going over? “November Rain,” W. Axl Rose’s attempt to write “Stairway to Dream On.”

And while the “November Rain” video seemed insane and nonsensical, that’s only if you don’t realize that it was secretly outing Slash as a Time Lord. Called, er, “Slash.” You see, the wedding — you know, where Axl is basically showing off that his girlfriend is supermodel Stephanie Seymour — takes place in and the wedding takes place in his TARDIS.

And now the most famous scene in that video — one of the most famous scenes in any music video — where Slash walks out of the giant church where the wedding is plays his guitar solo while a helicopter shot reveals that the church is larger on the inside that it is on the outside suddenly makes sense, right?

Back then of course, it didn’t make any sense, because whoever heard of a Time Lord playing guitar? Now, of course, we know better. Though we should have realized it then, because how else would Slash get a CREEM T-shirt in 1992?

That said, make all of the fun you want, because the popularity of “November Rain” has been as huge as the song, and the nearly nine-minute single made the top ten, and the video was not only the top video on MTV that year (though it didn’t win the VMA), since it was put on YouTube in 2009, it’s been watched over 600,000,000 times.