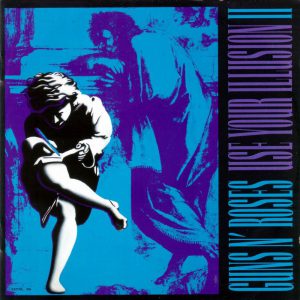 Out of all of the ridiculous epics that either graced (or ruined, depending on your opinion) the Illusion twins, the piano-driven “Breakdown” is easily my favorite.

For one thing, it’s got one of most sublime musical passages in all of their music. It’s about 1:20 in, and Axl has already sung the first verse, Izzy & Slash have slammed in with some power chords, and the whole song comes to a near halt for a second, before a gorgeous jumble of drums, pianos and guitars weave in and out of each other for just a couple of measures until a Matt Sorum snare slam kicks the song into gear.

After that, Dizzy Reed’s piano and by a modified Bo Diddley beat in and out of the stop-time choruses power “Breakdown” musically, and Axl is singing reflective lyrics in his wistful voice.

Slash weighs in after the first chorus with a tremendous solo, and again at the end, when “Breakdown” kicks into its highest gear, climaxing with Axl quoting/stealing/appropriating Clevon Little’s monologue from Vanishing Point.

Ah, Vanishing Point, a film that holds a weird place in my personal film history. It came out in 1971, but there was no way I saw it before 1974 or 1975. But I know I saw it in the theaters, so it maybe have been a revival.

All I remember about it is this: it had a weird structure — starting near the end (which gave it its name — there was a DJ played by the Sheriff in Blazing Saddles, and it was the first time I ever saw boobs in a movie. Or any screen, I guess. One of the characters was a girl riding a motorcycle in the nude, because I guess that’s what happened in the Southwest in 1971?

Anyways, I always like to imagine that the reason that Axl chose to monolog from Vanishing Point not because he felt it said something about heroism or freedom, but because it was the first time he saw boobs in a movie, too!

Oh, and one more thing: two things I discovered while researching all of the Guns N’ Roses posts: One: they have a lot of fan-made videos for the songs that didn’t have proper videos, nearly all repurposing clips from their proper videos.

And two: the comments section of Guns N’ Roses videos aren’t a place for the faint-hearted.