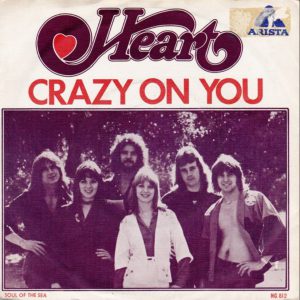 While the follow-ups “Magic Man” and “Barracuda” were both bigger hits, this is the early Heart single that I truly loved.

With Roger Fisher’s corkscrew riff spiraling over Nancy Wilson’s rapidly-strummed acoustic guitar, “Crazy On You” exploded from the radio in 1976, marking Heart as something different from the very start.

But of course, it’s more that just a riff, as “Crazy on You” never stops changing direction, adding weird bridges, offhand guitar flourishes and of course, lyrics about female desire, sung with both subtlety and power by Ann Wilson.

I was a willow last night in my dream
I bent down over a clear running stream
Sang you the song that I heard up above
And you kept me alive with your sweet flowing loooooovvveee!
Crazy!

The overdub that juxtaposed Ann’s scream of the word “love” with with an equally powerful scream of “Crazy” and the riff kicking back in is still utterly thrilling.

40 years later, it now seems strange how strange Heart seemed. And that’s a good thing. But in the hard rock world of the mid-1970s, a Zep-influenced band fronted by a pair of sisters hardly computed.

So the fact that they had hit singles with slightly weird and completely uncompromising songs like “Crazy on You” made them pioneers and trailblazers in the same way as Patti Smith or The Runaways — both of whom released their first albums in 1976 — who usually get more credit from people like me than Heart for reasons that are far too complicated to unpack here and now.