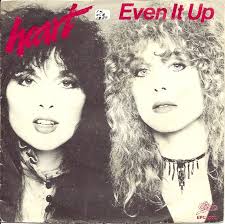 In 1980, we had one of the weirdest micro trends ever: established mainstream artists making their “New Wave” album. Which, depending on the artist, either meant replacing guitars with synths, or streamlining their sound somehow.

So within a few months, we got records like Alice Cooper’s Flush The Fashion, Billy Joel’s (yes really) Glass Houses (which had the execrable “It’s Still Rock ‘n’ Roll To Me”) and of course, Heart’s Bebe LeStrange.

Of course, listening to the great single from Bebe LeStrange, “Even It Up,” it now sounds like their concept of going “New Wave” mean trading Led Zeppelin IV for Sticky Fingers.

Which is fine, and probably why “Even It Up” spoke to me then and now: the chugging guitars, straight-ahead drum beat and even horns on the chorus are eternally up my alley, as are Ann Wilson’s tough vocals and even tougher lyric about a man who ain’t no magician.

When doing research for this post, I went back a listened to a lot of the Heart singles that dominated the radio between “Crazy on You” and “Even It Up,” and I think I underrated them a bit. Obviously “Barracuda” is pretty great, but songs like “Kick it Out,” “Heartless,” and even the discofied “Straight On” are all more solid than I seem to remember.

And some of this could be that old devil nostalgia perched on my shoulder, my guess is that whatever good feelings I had about them at the time dissipated in the wake of their still-shitty overblown power ballad era.

Which is too bad: a string of singles that were tough lean rockers like “Even It Up,” would have been awesome but of course, it stalled at number 33, and they decided to take another route. Now, given that it’s perched between their early name-making singles and their 1980s commercial peak I even wonder if anybody who wasn’t listening to the radio in 1980 even remembers “Even It Up.


Official video for “Even It Up”