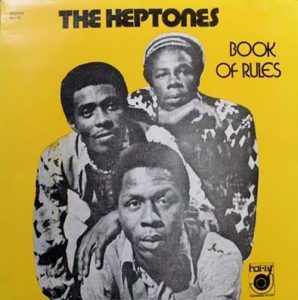 While The Harder They Come soundtrack has forever been touted as the essential reggae soundtrack compilation, the 1980 soundtrack to much-less-well-known Rockers was nearly as important to me.

And that’s just for a single song, The Heptones’ otherworldly “Book of Rules”

Definitely on the short list of the The Prettiest Song Ever Recorded, Reggae Division, “Book of Rules” is utterly, unapologetically religious. And like the best reggae songs is mysterious and powerful enough to convert a unreconstructed heathen like me.

Fronted by a bassline that would be the most memorable part of just about any other song and a piano holding down the fort in a deathless staccato riddim, “Book of Rules” features co-writer Barry Llewelyn exquisitely singing the lead:

When the other Heptones come in on the second half of the chorus and go even higher on the wordless “Pow-wha-pow-pow-pow” harmonies that come after, you can hear Jah himself nodding his approval and maybe even singing along.

I don’t think I ever did get around to seeing Rockers.

Fan-made video for “Book of Rules”