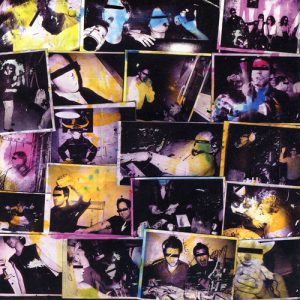 While it never came close to killing me, I was stuck in a job that I absolutely hated, and we were either dealing with or had just dealt with some terrible neighbors that made even going home from work almost as bad as dealing with work. Hell, I might have even been developing an ulcer.

So I was not in a good place at all. That was about the time that “The Swish” came into my life, and through it, the affection I had already developed for The Hold Steady through Separation Sunday turned into full-out love.

This is not a story about how The Hold Steady saved my life. After all, it was 2005, not 1985, so the idea of any band saving of my life — even metaphorically — at 42 is just plain silly.

Pills and powders, baby, powders and pills
We spent the night last night in Beverly Hills
This chick, she looked just like Beverly Sills
We got killed

No, with the Hold Steady, it was something different: the realization that I could love a brand-new band even as a middle-aged man. Not with the same fire and passion as I loved R.E.M. or The Replacements, but with the knowledge that it was only age that kept that fire and passion from happening.

A different kind of love, but love nevertheless.

Tights and skirts, baby, skirts and tights
We used to shake it up in Shaker Heights
This chick, she looked just like Patty Smythe
She seemed shaky but nice

I’m just stalling here, of course. Afraid that my words will be inadequate to describe my love for this song, which is all sharp angles and sharper elbows, pushing everything out of its way with a pure blast of rock ‘n’ roll balls, smarts and a deep sense of humour. None of which would matter if it wasn’t for Tad Kubler’s riffs that drilled a hole right through the center of the world.

She said my name’s Rick Danko, baby
People call me One-Hour Photo
I got some hazardous chemicals
So drive around to the window

But let me back up for a second. I’d already heard and loved Separation Sunday, because to be a music fan in the age of glut means discovering things out of order, so their second album hit my radar first. So after being blown away by that one, I quite naturally immediately followed it up with Almost Killed Me.

On both records, there was something about Craig Finn’s voice declaiming over Tad Kubler’s guitar that sent me back to the days where the combo of an unique vocalist and an awesome guitar-slinger formed the basis of many of my favorite bands. Page/Plant. Morrissey/Marr. Buck/Stipe. Jagger/Richards. Bono/Edge.

But it had been awhile: for whatever reason, all of the rock ‘n’ roll bands I loved in the 1990s were about auteurs, either single or dueling. Pavement. Uncle Tupelo. Nirvana. Drive-by Truckers. Even Oasis.

So there was a moment where I was driving home from that fucking job at IndyMac Fucking Bank, that job where every day I could see a little piece of my soul disappearing over the San Gabriel Mountains, and “The Swish” came on while I was driving on the 134 across the ridge overlooking Eagle Rock, and I couldn’t turn it up loud enough. And I played it again. And again.

Shoes and socks, baby, socks and shoes
We spent the night last night in Newport News
This chick, she looked just like Elizabeth Shue
We got bruised

Like nothing I’d heard in years, “The Swish” felt like the rock ‘n’ roll life I had flirted with. The rock ‘n’ roll life I gave up on after it almost killed not just me but people I loved. It was like like somebody had finally figured out how to make classic rock that sounded like it could only exist right this very moment.

She said my name’s Steve Perry, baby
People call me Circuit City
I’m so well connected
My UPC is dialed into the system

With that snare drum ringing out between the stabbing riff, and the whole song crashing like waves after every line on the verses, it was the most exciting thing I’d heard in years, decades maybe.

Right here, at the end of this chorus. Just hold for a second, and listen to how awesome this is.

Right now, the guitars that have been raging all around Craig Finn singing about how he (and I) survived the 80s one time already just explode with the drums into an eternal stop time as Finn cries “So hold steady” and just as the whole song feels like the end of the universe, only then does Tad Kubler take the central riff, switch it from crash mode to momentum mode, and push the “The Swish” even higher.

It’s just a couple of chords played slightly differently and yet, it’s everything.

I got — I get — the same buzz from that moment that I’ve always gotten from The Stones exploding into in the chorus of “Street Fighting Man,” or The Clash’s coda for “Complete Control” or Bruce Springsteen’s “1-2-3-4!” in “Born to Run.”

It didn’t save my life. It didn’t even change my life. But “The Swish” almost became my favorite song in ages and drove me into the rest of Almost Killed Me, which drove me back to Separation Sunday, and they made me at least feel better just for the fact that I had a band again that I could drive my friends crazy evangelizing about again.

And I survived 2005 one time already, and I don’t recall it all that fondly.

Official video for “The Swish”