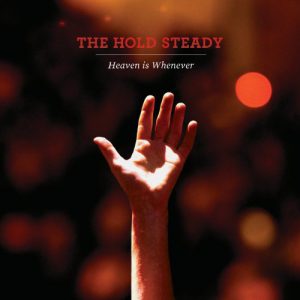 The culprit, I think, was the production, which was simultaneously too thin and too overburdened, like they couldn’t figure out how to fill the space that used to be taken by the departed Franz Nicolay’s keyboards.

I enjoyed nearly all of the songs, but I loved very few of them.

And the only absolute winner was the opening, “The Sweet Part of The City,” which fades in with gently keening slide guitars and wafts gently as Craig Finn reminisces about living in what a friend of my once called “the cool part of town.”

It’s slow and gentle, and while there isn’t a crunchy guitar in sight, there are loads and loads of spooky noises and sleigh bells and descending guitar riffs. It probably shouldn’t work, but it’s absolutely lovely.

And I remember being so thrilled by this song when I first heard it: it wasn’t like any other Hold Steady song I’d ever heard, and yet it felt exactly like them. Of course, that was partly because of the words, which ended with a prototypical Craig Finn lyric.

It’s a near-perfect way to start an album, and it probably amplified my disappointment — which I should point out is relative, not absolute — with the rest of Heaven is Whenever, which despite things like the chorus of “The Weekenders,” the lyrics of “Heaven is Whenever” and the massive ending of “A Slight Discomfort,” never had a song that gelled quite as well.

“The Sweet Part of The City” performed live in 2010