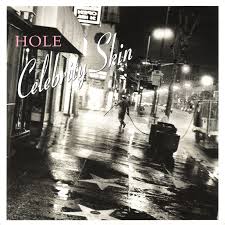 If Live Through This was already scandalous because of its (relative) polish, then the big, brassy and glossy Celebrity Skin was tantamount to high treason against indie ideals.

Not that Courtney Love gave a fuck: the circumstances surrounding Live Through This and Kurt Cobain’s suicide had made her infamous, something she milked on AOL as well as the subsequent tour, and her performance on The People Vs. Larry Flynt threatened to make that infamy tip over into actual fame.

So damn straight she was going to make Celebrity Skin as accessible as possible, even corralling Billy Corgan as a ringer and fellow heretic, because this was her shot to be the biggest rock star in the world, which I think would have been more subversive than remaking Pretty on the Inside for the third or fourth time.

And while Celebrity Skin was both a critical and commercial success, there was just too much shit swirling around it to be world-conquering. Even at the time, I thought that it could have benefited from a bit of editing, as the back half wasn’t nearly as good as the first half, which kicks off with the rip-roaring title track.

Over a heavily Corganized riff, Courtney picks up right where she left off:

Oh, make me over
I’m all I want to be
A walking study
In demonology

With guitars being piled upon guitars, and Courtney’s vocals processed so much they were beyond process, “Celebrity Skin” was all shine and polish, stopping and starting with abandon until it dropped into its biggest hook of all:

When I wake up in my makeup
Have you ever felt so used up as this?
It’s all so sugarless
Hooker, waitress, model, actress
Oh, just go nameless

With the guitars jangling not crunching, and Melissa Auf Der Maur singing “la-di-las” in the background, it was all so completely calculated that it shouldn’t have worked at all. But of course, it was also perfectly calculated so couldn’t help but work, especially as a contrast to the legions of guitars that dominated the rest of the song.

For me, who was already predisposed towards liking Courtney Love, and already kinda sick of the the holier-than-thou indie snobbery that I’d encountered on the internet, “Celebrity Skin” was utter catnip.