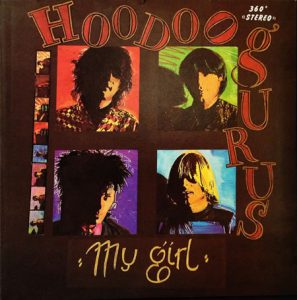 “My Girl” was the last song on the U.S. version of Stoneage Romeos, and — for me, at least — was a stellar ending to an album that completely resonated with my circle of friends.

An offshoot of the “Hang on Sloopy” branch of the “Louie Louie” family tree, “My Girl” starts out with just a couple of quiet chords as Dave Faulkner sings his sad tale of woe, but almost instantly builds into a chorus that is as musically uplifting on anything else on the album.

It’s a perfect contrast with the lyrics of the second verse.

I took her to the dance
And then I didn’t see her all night.
Then a friend said he saw her
With some other boy just outside.
When I went out she was alone.
She said, “I would like to go home”
I asked her, “Who were you with?”
She said, “No-one.”
I could tell that she lied
(And a voice said inside)

After that verse, Brad Shepherd kicks in with a low-down guitar solo, and then twists it around as the song builds towards a big, glorious finale where everybody is joyously singing about Dave Faulkner’s romantic issues.

Which weren’t really his, as Faulkner said that it was more of a love song about love songs, a tribute to all of the sad love songs of the 1960s that he loved. Which is probably why it felt timeless then, and still feels timeless now.