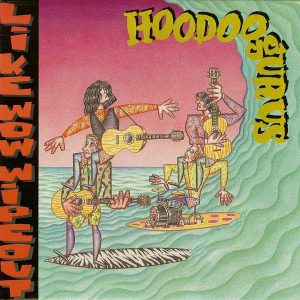 Mars Needs Guitars! was a weird beast. I loved the first side, but couldn’t stand the second side, which got away from their core strengths. Over the long decades, I’ve changed my mind somewhat, and enjoy a couple of songs from it now, but they still don’t compare to that first side.

And how could they?

Because the first side of Mars Needs Guitars! — starting off with “Bittersweet, barreling through “Poison Pen,” “In The Wild” and “Death Defying” before climaxing with “Like Wow-Wipeout” — was as fantastic of a side of a record as anybody put out in 1985.

Powered by Mark Kingsmill’s dumb-but-fun surfer cheerleading drumbeat battling an equally dumb-but-fun guitar riff, “Like Wow-Wipeout” is a flat-out party song, alternating that drumbeat on the verses with a chorus where Dave Faulker lists everything he loves about his girl.

Naturally, the “ahhhhs” are the key ingredient for the chorus, along with Kingsmill’s groovy backbeat, so it doesn’t really matter what Faulkner’s singing, just as long everybody else kicks in with those “ahhhhs.” But it’s kinda cool that it’s a declaration of instant and eternal devotion.

And, of course, the last line of the chorus builds and builds a little bit more each time they get to it, then, after the third chorus — and a couple of modulations, natch — Dave Faulkner really stretches it out while the rest of the band aimlessly meanders around him, just waiting to see what happens next.

And WHAM! Kingsmill takes off into a into a lightspeed double-time with the rest of the band chasing him down before he drives them all into a wall. Almost instantly, both Faulkner and Brad Shepherd figure that their only choices are guitar solos.

And that’s how “Like Wow-Wipeout” ends: the entire band hurtling forward until they fall right off of a cliff.

Apparently all of this madness resulted in the Gurus biggest single in Australia to date, and my close personal friends The Miss Alans used to play a kick-ass version as well.