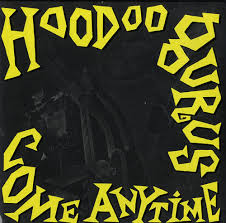 Of course, that “restrained” is relative, but at least the drums sounded like drums again, and the spaces between the acoustic guitars and electric guitars were more defined.

A love song about sex, or a sex song about love, “Come Anytime” featured a prominent acoustic guitar riff dueling with an electric guitar hook, and featured what was a new instrument for the Gurus, an organ floating throughout.

And, of course, one of their trademarks, the call-and-response chorus:

Featuring a clever arrangement that has the song start over when the chorus ends, more velocity than you might expect, and an invocation of The Handclap Rule near the end, “Come Anytime” was no less of a power-pop classic than “I Want You Back” or “Bittersweet.”

Or at least that’s how I see it now: I’m not sure I appreciated “Come Anytime” as much in 1989 as I do now. Maybe because I was taking their excellence for granted at the time, as opposed to reveling in it.