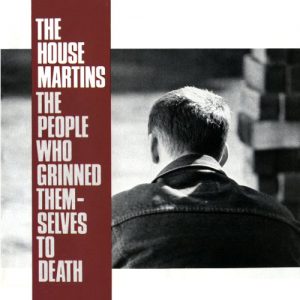 Album: The People Who Grinned Themselves to Death
Year: 1987

The exception, of course, being the title track from their second album, , sorry, I mean The People Who Grinned Themselves To Death.

OK, that was a cheap shot, and a reference to how The Housemartins were positioned as a Smiths for people who couldn’t stand Morrissey’s antics.

That said, I always the punky speed and snarky chorus of their title track dig at the royal family’s effect on Great Britain.

What makes it for me is the double-time drums on that chorus, as well as the quick horn flourish and the “ahhhhhs.” It was instantly memorable, and I loved the imagery of Paul Heaton’s lyrics, to boot.

Before the chorus is a build-up featuring some stop-time guitar riffs from Stan Cullimore, and nice bass runs from future slim fatboy, Norman Cook.

It all adds up to a pretty essential mid-80s slice of proto-Britpop.

“The People Who Grinned Themselves to Death”