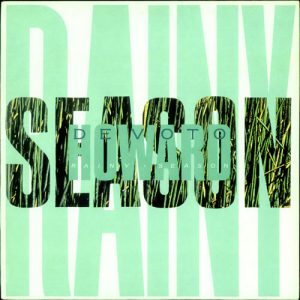 After co-founding and leaving both The Buzzcocks and Magazine, Howard Devoto’s next move was to put out his only solo album, 1983’s Jerky Versions of THE DREAM.

And while, truth be told, most of the album didn’t do all that much for me, I really loved the single, “Rainy Season.”

One huge keyboard-filled metaphor for the pain you feel at the end of a relationship, “Rainy Season” winds its way through darker and darker pathways — at one point he calls his brain a “leaky boat,” — as the chorus gets ever grander.

At first, Devoto sings the chorus all by himself, but by the second time around, a whole chorus of multi-tracked Devotos are joining in, adding a boatload of extra pathos to the pain he is so eloquently expressing.

Also helping to hammer his point home: Dave Formula’s piano, dancing around the lyrics and chorus with precision and dexterity, adding a flourish here and a hook there. To be honest, without that piano, “Rainy Season” is a near-generic New Wave song, but with it, it becomes a great New Wave song.