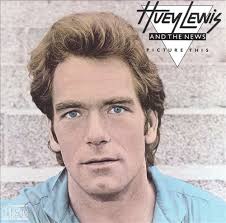 While the early days of MTV is usually remembered for focusing on photogenic British acts — and foisting upon the world folks like Duran Duran, Adam Ant & Billy Idol — the truth that they also helped the careers of non-photogenic ugly-ass folks who happened to make clever videos.

Right? So we also had huge hits by Greg Kihn, ZZ Top, Eddie Money and of course, Huey Lewis and the News, whose completely agreeable and totally inoffensive if slightly slicked up bar-band sound somehow battled Prince, Madonna & Bruce Springsteen for chart domination in 1984.

But, of course, before all of that, the were just a band who walked through the door that Bruce Springsteen opened, with ties to Elvis Costello & Dave Edmunds, and got half-Rockpile / half New Wave songs on the radio like “Some of My Lies Are True (Sooner or Later)” and the admittedly stellar “Workin’ For a Livin'”

A song defined by the fact that the title contains not one, but two dropped g’s, “Workin’ For a Livin” almost lets you believe that some the litany of dead-end jobs Huey lists are things he actually did at some time, so sincere does he sound.

Also helping: Sean Hopper’s carnival-like organ and Lewis’s long harmonica solo, somehow signifying the working — sorry, I mean the workin’ — man’s blues. And their secret weapon, the harmony singing of the News was also evident throughout the song, especially on the “ooooooh-oh workin’ for a livin'” bridge.

And that harmony singing was the highlight of the one time I saw Huey Lewis & the News live. Tim & I saw them at the Star Palace in March of 1982, while they were still a couple of years from world domination, and thus still playing clubs.

Nearly 35 years later, all I remember is the encore. Which is fine, because it’s probably the only thing I remembered 35 minutes later, as well. It was simplicity itself: a doo-wop acapella version of Sam Cooke’s “Chain Gang.”

It was completely unexpected, and totally blew us away. I don’t know if was something they kept doing as they became huge — probably, since it’s a hell of a show stopper — but I’m glad that a video I just found of a show near the time I saw them verifies my memory.

Official Video for “Workin’ For a Livin'”