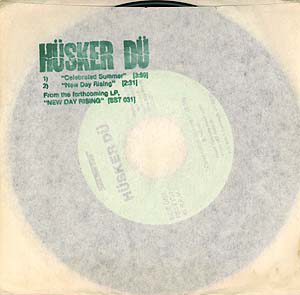 I’ve only ever been to Minneapolis-St. Paul one time. It was to see The Replacements, of course, much of the fun of the trip was hanging out with the people who lived there. So Larry & Kevin gave us a tour before the show and Ira and Myra had lunch the day after the show.

To a California boy like me, that phrase resonated, and one of the things that has crossed my mind since is summer probably looms large for people who live that far north. Which is why it’s perhaps not surprising that Bob Mould’s greatest song is about the pressure that summer can put on people.

“Celebrated Summer” starts off with each guy in Hüsker Dü introducing himself: first Mould kicks off a short, sharp riff, which is cut short by a few whacks on Grant Hart’s snare and Greg Norton twisting the riff on his bass.

Then a few more whacks by Hart, and “Celebrated Summer” just explodes like illegal fireworks on a perfect summer night.

Mould sings this near the top of his range. And he is singing, not screaming. Not raging against the world, but rather trying to understand why the world’s seasonal changes are evoking emotions that he’s not even sure he understands. I mean, finally, it’s too hot to snow, but now what?

I guess I better think up a way to spend my time
Just when I’m ready to sit inside, it’s summertime
Should I go swimming or get a friend to hang around
It’s back to summer, it’s back to basics, hang around

And with guitar is singing along with him the entire time, Mould recalls other summers where those choices seemed a lot easier. And in fact, these things weren’t even choices, they were imperatives.

That right there is a Westerbergian level of universality. I mean what else is summertime for, if you can get away with it, but since this is Bob Mould we’re talking about, everything has to be questioned, and, in this case, with one of his most gorgeous melodies and aching vocals.

And then, with Grant Hart tornadoing around a series of Who-like power chords, “Celebrated Summer” crashes into a brick wall just when you assume it’s going to be taking off, and instead, Mould starts picking some notes on an acoustic guitar.

Wait. What? An acoustic guitar? On a hardcore song? No fucking way. It just wasn’t done. What a bunch of pussies these guys were. No wonder purists slagged them.

But fuck that. Bob Mould wants your full, undivided attention. Because here’s biggest the problem with summer: it ends. Sometimes while it’s still going.

And winter. It’s no fun. Even when it’s exactly cold enough to snow. So the support of Grant Hart & Greg Norton, “Celebrated Summer” kicks back into hyperdrive as Mould has a winter flashback.

Do you remember when the first snowfall fell?
When summer barely had a snowball’s chance in hell?

And then it’s time for the guitar solo. But not just any guitar solo: perhaps the greatest guitar solo that had yet appeared on any American punk rock song that wasn’t “Marquee Moon.”

So lets say the greatest guitar solo that had yet appeared on a hardcore song. And, let’s face it: that first wave of hardcore had some pretty fucking awesome guitar players in it. Still, to my ears, the guitar solo in “Celebrated Summer” topped anything that Greg Ginn or Billy Zoom or East Bay Ray had come up with, and was a definite precursor to J. Mascis’ destruction in “Freak Scene”.

With the man himself singing “summer” in the background, Mould’s solo in “Celebrated Summer” roars and gallops and shimmers with an almost feral beauty and then halfway through it jumps out of the speakers and dances around the room for while until the song stops and reins it back in.

All the more so that Mould can whip out the acoustic guitar one more time and ask:

Do you remember when the first snowfall fell?
Was that your celebrated summer?

“Celebrated Summer” became my favorite song on New Day Rising and maybe — maybe — my favorite Hüsker Dü song so gradually, I’m still not sure when it happened. At first, I preferred the title track and Hart’s UFO-lover, but as I got older, “Celebrated Summer” was the one that I always turned up a little bit louder, as if more volume would somehow grant me the wisdom I began to hear in it.

I do know this: if someone came to me and said “I’ve never heard a Hüsker Dü song, can you play some for me?” this is where I would start.