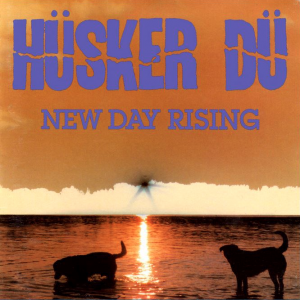 With its jaunty rhythm, barrelhouse piano and upbeat melody, Grant Hart’s “Books About UFOs” pretty much symbolized the poppier direction in which Hüsker Dü was taking their punk rock buzzsaw.

An unabashed love song, “Books About UFOs” was undoubtedly a gateway jam for of people who would have otherwise been put off by Hüsker Dü simply by reputation as a hardcore punk band. I can imagine more than one person heard “Books About UFOs” on their friendly local college radio station and when finding out it was Hüsker Dü, being surprised. And wanting to hear more.

Not to mention that it’s about a boy attracted to a girl not for her looks, but because she’s smart and weird and interesting in a specific way.

And then with Bob Mould singing “Ohhhhh-hoo” in the background, Hart unleashes an absolutely indelible chorus with a huge-ass grin on his face.

After the second chorus, following a verse where he’s admiring her dedication to her hobby while worrying that aliens are also checking her out, Hart is having so much fun that he yells over to Mould “one time!” and even goes “whoo!” as Mould launches into his guitar solo.

Pretty sure that’s the first time anybody ever let out a joyous “whoo!!” in a punk rock song.

And in this case, the solo is one of those where Mould just launches back into the melody line of the verses, like the solo in “A Hard Day’s Night”, because to go off on a pure shred would ruin the mood of the song, though he does add some flourishes at the end.

And just when you think “Books About UFOs” couldn’t get any better, Hart explains his plan for getting her to notice him.

“Books About UFOs” was already a top-shelf song even before they get to that insanely romantic last verse, but there isn’t isn’t a moment I haven’t heard it and wished I’d even once had that much game.