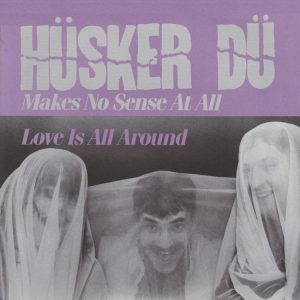 The first single from Flip Your Wig flipped the script.

Until “Makes No Sense At All,” Grant Hart was tagged as the “pop” guy who wrote the big, hooky songs like “Pink Turns to Blue” or “Books About UFOs” while Bob Mould wrote the statement songs like “Whatever” or “Celebrated Summer.”

But “Makes No Sense At All,” which came out a ridiculous six months after New Day Rising, stands as their pure pop pinnacle. Without sacrificing even an iota of their stratospheric roar.

Like “(I Can’t Get No) Satisfaction,” “Makes No Sense At All” is one of those songs that leads with its chorus, though unlike the long fuzz-guitar intro the Stones went with, the Hüskers just explode out of quick Hart drum lick:

With Grant Hart chiming perfect harmonies on the title, “Makes No Sense At All” is all sugary hooks sitting on top of razor-sharp edges, and the reverse of the normal verse-chorus-verse structure gives adds a sense of disorientation: just when you figure out where it’s going, it goes somewhere else.

And so at the end of each verse, there’s a build build build build and suddenly stop! Whereupon Grant Hart executes a dynamite closely-miked two-second snare roll hook that is one of the most pure and unexpected moments in all of their catalog.

That snare roll, man. How could I not mention it? People were making fun of me for how much I loved it 30 years ago, but listen to it again: all of the vocals and guitars are raging every which way and all of of sudden, there’s nothing but a burst of drums, but only for a couple of seconds, because the song itself is too impatient to let it go on any longer, and also, if it goes on any longer it loses all of its concentrated power.

It’s also ironic that even on Bob Mould’s greatest Hüsker Dü pop song, Grant Hart gets the most memorable hook.

If New Day Rising showed that Zen Arcade was no fluke, “Makes No Sense At All” was great enough where I started think that if Flip Your Wig was any good, then Hüsker Dü might just be one of the greatest bands ever.

Official Video for “Makes No Sense At All”


“Makes No Sense At All” performed live in San Francisco, 1985