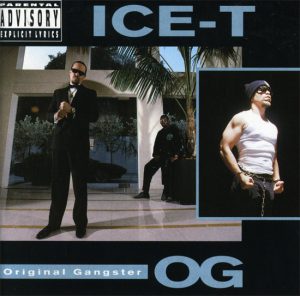 Now, of course, “When The Levee Breaks” is an all-time classic sample — I first heard it powering The Beastie Boys’ “Rhymin’ and Stealin'” and Beyonce just used it on Lemonade — and Ice-T himself used “Black Sabbath” on his previous record.

But together they were perfect for a track that Ice-T described as a “walk through hell.” A cinematic depiction of a night that went from zero to holy fuck! in a record period of time, “Midnight” puts in the middle of a shootout and car chase never knowing what’s going to happen next.

We boned down Vernon
Right on Normandie
Left on Florence
Gettin’ thru the E.T.G.’s
Spun out on Vermont
Made a left on Colden
Right on Hoover
“E where we goin’?”
He didn’t even answer that
Checked the rear view
They were still out back
Where were these brothers from?
What made these brothers come?
Bang! Our back window
Was removed by a shotgun

The panic in his voice during that verse makes one thing perfectly clear: we’re all going to die tonight, and we don’t even know why.

And while the sound effects that accompany the track are sometimes over the top — especially the horror movie scream after the first verse — they also add to the cinema verite feel that makes “Midnight” such a thrill ride.

And in fact, that’s how Ice-T gets away with a video that is little more than him rapping the song into a camera.