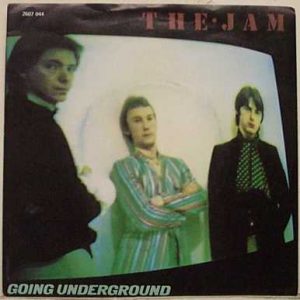 Welcome to The Jam’s greatest song.

Their first U.K. #1, and an absolute pinnacle of post-punk on nearly every level, “Going Underground” remains an absolute marvel all these years later.

It’s also the song I use to illustrate my Second Song on a Mixtape Theory.

Which is this: while it’s definitely important to make the first song on a mixtape a grabber and the last song a climax, it’s the second song on the mixtape (or CD or playlist) that indicates how serious the maker of said mix is about what they’re doing.

Which is why anytime it was apropos to whatever tape I was making, I would stick a song like “Going Underground” on it: not quite a first or a last song, but quite possibly the best song on the entire thing.

Only, the listener doesn’t necessarily know that, and after a second song this kickass, they’re hooked, wondering what other treasures are right around the corner.

Even over the relatively quiet opening, Weller’s so excited he doesn’t even finish one line before starting the next one, and before that opening verse is even finished, Bruce Foxton & Rick Buckler have taken off, with Weller is hot pursuit.

And right there, “Going Underground” turns, as the chorus reveals that all of the positivity that Weller was embodying was deeply sarcastic:

After that, “Going Underground” is a whirlwind of ever-higher modulations, amazing basslines — including a funky one near the end just for fuck of it – and crazy-ass drum rolls you don’t even notice until after they’re already over.

“Going Underground” is the beginning of the final period of The Jam. Massive stars in the U.K., small cult following here in the Colonies, but totally challenging and completely uncompromising. Even the songs I didn’t particularly like, I kinda loved what they were trying to do. And there weren’t that many of those.

When people talk about how much they miss The Jam, I think it’s because of the music they made from “Going Underground” forward. Yes, if they had broken up after Setting Sons, they’d have been remembered fondly, but this is where they started turning into icons.