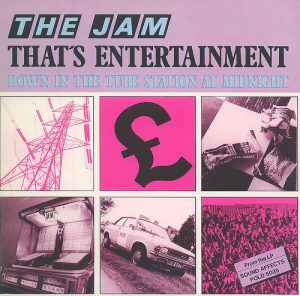 And of course, that slightly after the time Sound Affects was released here in the U.S., but I was fully chuffed that so many of people I met at KFSR were fans, and we could have conversations about the merits of a song like “That’s Entertainment,” the deceptively simple song that closed out side one.

With Paul Weller’s furiously-strummed acoustic guitar and Bruce Foxton’s lovely bass providing nearly all of the music, “That’s Entertainment” remains — to me — one of Weller’s most optimistic songs, all about enjoying the world around you.

A police car and a screamin’ siren
Pneumatic drill and ripped-up concrete
A baby wailing, a stray dog howling
The screech of brakes and lamplight blinking

And that’s pretty much it: in the verses, Weller lists as series of images drawn from life, and with Foxton harmonizing at points and laying off at other points, declares those things as entertainment. In other words: it’s great to be alive!

Musically, it never deviates from the pattern it initially lays down, though at one point, there’s some really cool backwards guitar over a verse, just to break things up a bit. Also breaking things up a bit: Weller & Foxton’s lovely “La-la-la-la-las” after the choruses later in the song.

Waking up at 6 A.M. on a cool warm morning
Opening the windows and breathing in petrol
An amateur band rehearsing in a nearby yard
Watching the telly and thinking ’bout your holidays

At first, because there were no electric guitars (outside of that backwards one that spidered in and then up and disappeared), I was kinda dubious about “That’s Entertainment,” but the gorgeousness of the melody and the profundity of the message ended up winning me over.