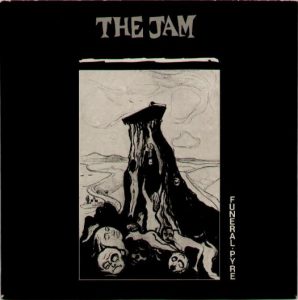 It’s nearing 2:00AM on a Wednesday (and I probably had to be at work at 8:00 the next morning), and The Jam have finished playing “Pretty Green” and answered Snyder’s questions, and after one last commercial break, he introduces a new song called “Funeral Pyre, ” which starts off with Bruce Foxton’s bass rattling off of the walls, and Rick Buckler turning his drum setting to “eternal roll.”

I couldn’t play my tiny 15″ TV loud without waking the rest of my family up, but I no doubt turned it up at bit more just in time to hear Paul Weller start ripping chords from his guitar, barely keeping up with his rhythm section. This. Song. Fucking. Rocked.

Down in amongst the streets tonight
Books will burn, people laugh and cry in their turmoil
(Turmoil turns rejoiceful)
Shed your fears and lose your guilt
Tonight we burn responsibility in the fire
We’ll watch the flames grow higher!
But if you get too burnt, you can’t come back home

For this part of “Funeral Pyre,” Buckler lays off of the eternal drum roll setting, and plays a more or less straight beat, allowing Weller to toss in some more crazed guitar and Foxton to even toss in a disco bassline at one point.

We feast on flesh and drink on blood
Live by fear and despise love in a crises
(What with today’s high prices)
Bring some paper and bring some wood
Bring what’s left of all your love for the fire
We’ll watch the flames grow higher!
But if you get too burnt – you can’t come back home

“Funeral Pyre” is one of my very very favorite songs by The Jam. Maybe second only to “Going Underground.” I love how it’s continually exploding in your face, musically, lyrically, and even vocally. When Weller leans into the chorus with a heartfelt “aahhhhhh” you feel every bit of what he’s feeling.

At the end, Weller is screaming about the funeral pyre while Foxton is chanting:

And Rick Buckler? “Funeral Pyre” is his finest moment, as he lets his inner Keith Moon out to play, but never ever once loses his place or loses control or even overshadow the song. “Funeral Pyre” is one of just two songs credited to all three members, and you can hear it: this is the glorious sound of The Jam as one of the greatest rock ‘n’ roll bands ever to walk the fucking planet.

Also: somehow “Funeral Pyre” made #4 in the U.K., despite being completely different from anything they’d previously done.


The Jam interviewed and a minute of “Funeral Pyre” on Tomorrow