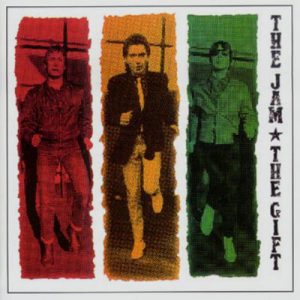 The final track on the final Jam album, “The Gift” was nothing more than a up dance number in the tradition of Martha & The Vandellas “Heat Wave.”

But it was also nothing less, either, and the one-two closing punch of “Town Called Malice,” and “The Gift” has always been a huge reason The Gift ended being my favorite Jam LP.

With Paul Weller’s guitar stabbing around Rick Buckler’s snare and Bruce Foxton’s bass grooving underneath a raucous organ, “The Gift” has one of my favorite Paul Weller opening lines to boot.

The gift of life. Right? Keep moving and get out of the way. While it be taken that just being alive is a gift, well yeah, but I prefer thinking about it meaning that he’s got the gift of life as in energy. That he’s a ball of never-ending energy, never stopping and barely even slowing down.

And man oh man, can I relate to that.

Never slow down. Never give up. Gotta keep movin’. Trust me, on the day I’m writing this, these words — this sentiment — means a whole hell of a lot.

As does the breakdown near the end of the song, where they bring in the handclaps — of course! — and police whistles and Weller’s guitar duets with the organ and Buckler is doing random drum rolls and then everybody is screaming and talking and it’s all one big dance party.

Of course, life isn’t one big dance party. Most times, it’s the exact opposite. But sometimes you just gotta say fuck it and have one. Because there will always be serious stuff to deal with. And if you got the gift of life, you can figure out how to deal with it.

Go shout it from your roof mountain top.