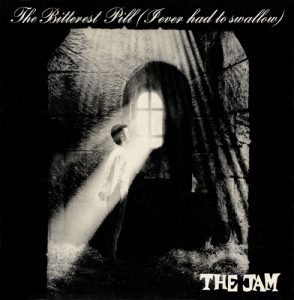 With Bruce Foxton practically non-existent — even the harmony vocals were sung by a female vocalist — and Rick Buckler limited to short drum bursts, “The Bitterest Pill” is really Paul Weller in full-blown Style Council mode: a string laden torch song about watching someone you love get married to someone else.

And maybe because of all of those things, it took me a long time to realize what a great song it really is, especially when Weller ratchets up into a quick falsetto just prior to the chorus, which is as pretty of a melody as he’s ever written.

Anchored by a chiming guitar and bracketed by soaring strings — or you know, a synth in “soaring string” mode — “The Bitterest Pill” would have felt like a departure, except for the fact that The Jam had done so many different things by then, it seemed like just another path that they could have continued to explore had they, you know, stayed together.

“The Bitterest Pill (I Ever Had To Swallow)”