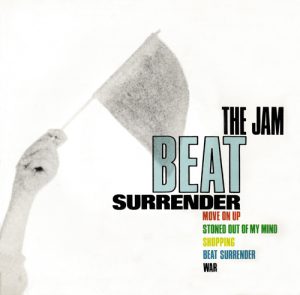 That’s why — after an initial Paul Weller & Bruce Foxton harmonized shout of “Beat surrennnnderrrr,” , they lead with the chorus:

Possibly because he knew it was going to be their last song, Weller sounds particularly free on “Beat Surrender,” trading off vocals with Bruce Foxton for one last time, and leaning into what was one last great lyric:

Of course, minus Weller’s guitar and with Rick Buckler playing pretty straightforward, “Beat Surrender” didn’t really sound like my platonic ideal of a Jam song. But even in early 1983, it didn’t really matter: like The Clash, they’d pretty much proven that anything that Weller, Foxton & Buckler played on was a Jam song, regardless of what it sounded like.

And even if they hadn’t, the infectious spirit of “Beat Surrender” would have won the day, being infectious enough where even people who had never really gotten why we were on so much about The Jam were “oh, I like this one.”

And that was that. Weller, of course, went on almost instantly form The Style Council — their first single came out in early 1983 — and is still making records while becoming one of the elder statesmen of British rock.

And while I didn’t really like The Style Council and have never found any of his solo albums to my taste (though I did like the song he and Noel Gallagher co-wrote for the most recent Monkees album) has simultaneously earned my respect and made me sad by refusing to reform The Jam for what would probably be a shitload of money.

As for Foxton & Buckler, gobsmacked by the break-up, kinda floundered around, and eventually formed a tribute band, From The Jam, about which I wrote some narsty things about a decade ago.

In any event, I’ve mellowed out about that: we’ve got bigger problems right now than whether or not Bruce Foxton & Rick Buckler make some money from their legacy, and I was probably wrong in the first place.

Anyways, The Jam always occupied a special place in my heart and life, and they always will.