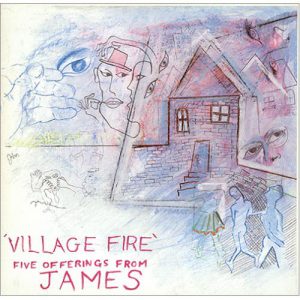 Imaginary dialog from the summer of 1985

COOL KID: No, dummy, the band James. From England.

ME: Oh, yeah, I think I read something about them in CMJ.

ME: Wait. Morrissey Morrissey? But he hates everything!

COOL KID: Right! So they must be awesome.

Such was the influence of The Smiths on our small but rabid hothouse fanbase which had sprung up in mid-1980s Fresno that James was practically a legend even before we got The Village Fire EP at KFSR.

That said: The Village Fire EP — which combined their first two U.K. releases into a handy single 12″ — was pretty awesome, featuring short, multi-part songs like “Folklore” and “If Things Were Perfect” that sounded nothing like The Smiths.

I mean, sure singer Tim Booth might have had a superficial vocal to SP Morrissey, but what gave The Village Fire EP such a kick was their madcap drummer, Gavan Whelan, who is on fucking fire throughout, but especially on the opener, “What’s The World”

With Whelan tumbling and rumbling underneath, Booth gets meta about their career before they even have one.

At that point, bassist Jim Glennie does tosses in a quick little bass hook and Whelan slows down just for a second. But he’s still tossing in fills where they shouldn’t exist and the rest of the band is kinda just along for the ride.

I’ve just now realized this, but it’s all very Happy Jack-era Who, where the guitars aren’t really jacked, but the drummer certainly is, especially the bit at the end where Booth rockets his voice into a falsetto while guitarist Paul Gilbertson gets down into the weeds for while with Whelan. only to be called back by Booth, who — after only two minutes — is ready for the song to end.

My close personal friends The Miss Alans used to do a pretty great version of this in their live set, though there doesn’t seem to be any tapes (that I know of) existing.