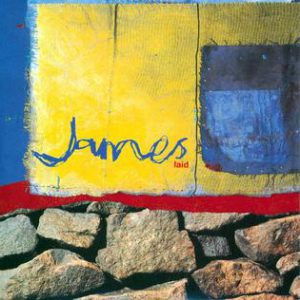 James never really lived up to the promise of The Village Fire EP, and while I know that some people loved their first album proper, Stutter, I remember being disappointed with it, and the follow ups as well.

So I kinda wrote them off. Which meant that I was taken by surprise by their biggest song — at least here in the States — the title track of 1993’s Laid.

Produced by Brian Eno, “Laid” is an anthemic fucksong that’s anchored by a snareroll drumhook that’s as straightforward as the words Tim Booth is singing.

My therapist said not to see you no more
She said you’re like a disease without any cure
She said I’m so obsessed that I’m becoming a bore, oh no

Both musically and lyrically, “Laid” perfectly captures that short period after you’ve just started fucking someone you’ve got tons of chemistry with and full access to, when that’s pretty much all you want to do all day every day.

But you know you shouldn’t.

But you still do.

When Tim Booth lets out his long orgasmic falsetto and drummer James Mike tosses in that big snare hook, “Laid” is dirty, it’s sexy, it’s exactly the type of fun you shouldn’t be having but never want to stop.