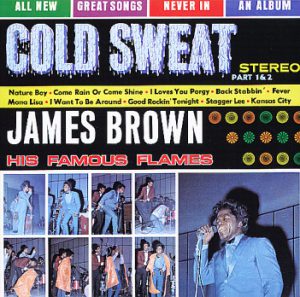 Everything is percussion. That, of course, is the formal innovation of James Brown’s mid-1960s funk: to treat every single instrument in the room as a percussion instrument.

And with its stop-start horns, bass, and drums, and of course the chickenscratch guitars of Jimmy Nolen and Country Kellum, “Cold Sweat” might be the epitome of that innovation.

On the initial verses, all of those percussion instruments are playing off of each other — listen to how the horns give room to the bass over and over again — always threatening to fall apart if even one of the guys misses a single note. But of course they don’t, and Brown gets to scream and plead and cajole at his latest love interest:

As he leads up to the chorus, the band starts getting together — doubling down on the one before every line — until it all climaxes as Brown screams the stop-time chorus.

Then after the second chorus, it’s solo time, as Brown calls for Maceo Parker to dialog with him on the sax. And while Maceo tunnels in and around the beat, Brown interjects random grunts, moans and boogaloos, and eventually “to give the drummer some”

And at that point drummer Clyde Stubblefield — backed by bassist Bernard Odum nearly the entire time — takes a long, extended solo without even once losing the funk. Not even close. Brown’s so impressed that he barely interjects. Well, he still does, but not so much that future samplers didn’t have a wealth of material to work with.

Eventually, Brown goes back in to the verse, with everybody on point once again, but after the verse, instead of resolving with the stop time part one last time, he instructs the band to “keep it right there” and lets loose with an absolutely stunning vocal performance:

And with was what probably a wink at the rest of the band, they slam the song home, ready to work on the next one.

The amazing thing about “Cold Sweat” is that for all of the intensity, the song itself moves not at warp speed, but more of a mid-tempo strut, taking it’s goddamn time to get where its going because it has so much confidence we’re all dying to find out where that is.


Every Certain Song Ever

A filterable, searchable & sortable database with links to every “Certain Song” post I’ve ever written.