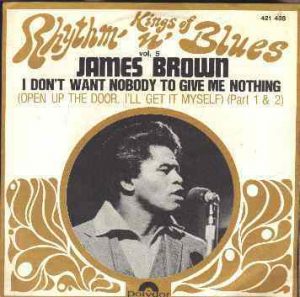 Sure, you could choose to go to a film; watch the television; listen to the radio; see a play; see another concert; watch a ball game; go to a magic show; watch a stand-up comic or a mime or go to the circus. But why even bother? It doesn’t matter: compared to James Brown all of those others are just slackers and posuers. They will not work nearly as hard as he does for your entertainment dollar.

It was a great crossover move because who wouldn’t want to see a performance by the hardest working man in all of Show Business? It’s right there: he’s going to give more than anybody else you’ve ever seen!! How can you resist that? You can’t.

It was, of course, that reputation that informed an empowerment anthem like “I Don’t Want Nobody To Give Me Nothing (Open Up The Door, I’ll Get It Myself)”, where Brown tells the world that he don’t want nobody to give him nothing.

But he does need that door opened, of course. Probably just a crack, though, is all somebody like James Brown needs.

And when that door is opened, Brown struts in, anchored by a solid pre-disco bassline, swirling horns and a chittering syncopated drumbeat, and just takes what he wants.

Out of all of Brown’s black pride anthems, I prefer this to “Say It Loud (I’m Black and I’m Proud)” mostly because I fucking hate children’s choirs.

“I Don’t Nobody To Give Me Nothing (Open Up The Door, I’ll Get It Myself)”