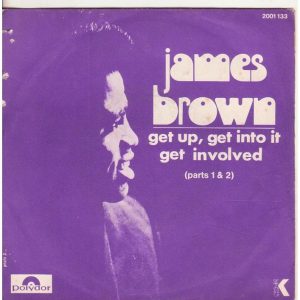 James Brown, The Godfather of Soul!!

This, of course, was Brown’s best branding effort of all. Even better than “The Hardest Working Man in Show Business. After all, if they ever did come up with the work-ethic rating system, you could be displaced from the top of the hardest-working charts, but once you’ve become Soul’s Godfather, it’s a lifetime thing.

Think about it: Kings of Rock and Pop can be toppled by coups. The Only Band That Matters today doesn’t matter tomorrow. The Boss gets fired. But being a Godfather is a lifetime thing — like a Supreme Court Justice or President.

Best of all, as The Godfather of Soul, you only have to take responsibility for Soul if Soul’s actual parents pass away!

Of course, in James Brown’s case, he became the Godfather of Soul by making Soul an offer that it couldn’t refuse. You know, all of those singles that sounded like nothing else had ever sounded before, and nearly everything has sounded like since.

Like “Get Up, Get Into It, Get Involved,” which found yet another crazy ass groove with Catfish Collins wobbling all over his guitar and the horn section playing in circles trying to catch up with him.

Meanwhile, Brown and Bobby Byrd are exhorting their audience to “Get up, get into it and get involved.”

By the end, Brown’s & Byrd’s screams of “Get involved” over and over and over again have become so insistent that the only possible response is “Yes sir, Mr. Brown, just as soon as I’m done figuring out what the hell is going on with this insane song. Or as soon as I stop dancing, whichever comes last.”

“Get Up, Get Into It, Get Involved”