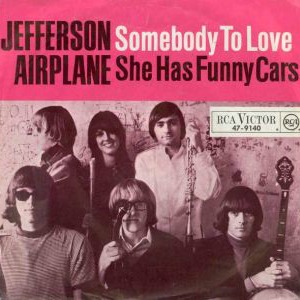 I’m going to admit it: for the most part I found all of the incarnations of Jefferson Airplane, Jefferson Starship and Starship pretty dull.

And that includes the album that made their initial reputation, 1967’s Surrealistic Pillow, which I remember hearing in the late 1970s — I think it was one of the reel-to-reel tapes that my Uncle Bill gave to Joe — and not really getting it.

I’m sure I tried a few more times over the years, but none of it ever got through to me, outside of the huge singles that made its reputation in the first place, especially the first one, the massive-sounding garage rocker “Somebody to Love.”

The massive-sounding part is, of course, Grace Slick’s voice, which is the first thing you hear in the song and the focus throughout. When she barrels into the chorus, you might notice Marty Balin’s harmonies, but it’s Slick who makes the search for love sound like THE MOST IMPORTANT THING THAT’S EVER BEEN IN THE HISTORY OF THINGS.

What’s so weird about “Somebody to Love” is that it’s got Slick’s humungous voice on top of guitars that are poorly-recorded (kinda like the blocky sound (or “sound,” really) Andrew Loog Oldham stumbled around with on the early Stones records) and so full of reverb they almost vibrate out of the speakers.

But of course, those guitars give it dirty, garagey feel that perfectly compliments Spencer Dryden’s snare double-time that drives the song, even if his drums are buried so deep in the mix that you almost miss the times he skids out from under the beat.

And once again, none of this mattered when Slick powered into that chorus over and over again. YES GRACE, I’LL FIND SOMEBODY TO LOVE, GET OFF MY BACK, ALREADY!


“Somebody to Love” performed on American Bandstand, 1967