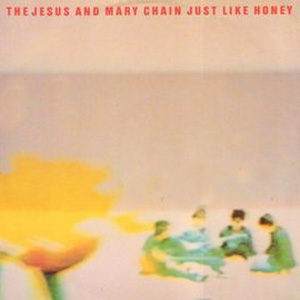 Until I heard it.

“Just like Honey” begins Psychocandy with the “Be My Baby” kick … kick-kick snare pattern, but of course Bobby Gillespie isn’t playing a kick drum, but rather a floor tom, over which William Reid is placing crackling phased out guitars.

And here’s the thing, where’s all of the feedback? Where’s the sheets of noise? Nowhere to be seen, because with “Just Like Honey,” The Jesus and Mary Chain were announcing that they weren’t a one-trick pony.

Or maybe it was so Jim Reid could sing his dirty fucksong with all of the tenderness of a straight-out love song, as he, well, croons:

Listen to the girl
As she takes on half the world
Moving up and so alive
In her honey dripping beehive
Beehive
It’s good, so good, it’s so good
So good

It’s sweet and tender and lovely, and as the song progresses, they glide into a regular beat, and William Reid begins to toss more guitars into his infinite reverb chamber and the song starts gathering momentum and just when you figure it’s going to build to the noisy part, it stops dead in its tracks.

And over the Phil Spector beat, Jim Reid single entendres:

He’s almost instantly joined by Karen Parker, who was Bobby Gillespie’s girlfriend at the time, singing counterpoint as the song begins to build and build:

Whether or not you’d heard the previous singles, “Just Like Honey” was the perfect way to open Psychocandy, as it was simultaneously a totally different sound for the band to those of us who had heard the singles, and ridiculously gorgeous opening salvo for newbies.

Oh, and I almost forgot to mention, it was a scene from the “Just Like Honey” video what provided the album cover for Psychocandy. If this wasn’t the first time a band had made that kind of explicit connection between the marketing of their image via music video and the marketing via their album covers, it was pretty damn close.

And of course, “Just Like Honey” is probably their most well-known song, thanks to its prominent placement at the end of Lost in Translation, turning a whole new generation onto it and leading to supremely awkward moment at Coachella 2007 when Scarlett Johansson stood around for two minutes being ignored by Jim Reid just so she could sing the Karen Parker vocal part at the end.