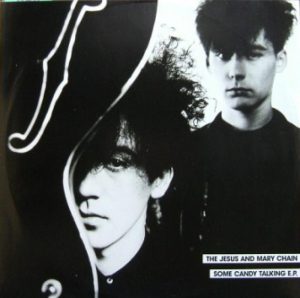 For all of the discussion surrounding The Jesus And Mary Chain’s Velvet Underground influence, I gotta admit that I didn’t really hear it as much on Psychocandy as a lot of other folks did.

I mean, it was there, of course — both formally in the floor toms / snare drums beats and informally in the noise that permeated the songs — but there was so much more going on than Velvets aping.

That said, the title track to the Some Candy Talking EP — which followed so hard on the heels of Psychocandy that it was on the original CD issue in 1986 — was pure Velvety goodness from start to finish.

From the slow guitars that started it to the 4/4 pulsebeat the dominated the chorus — Bobby Gillespe’s last hurrah before concentrating full-bore on Primal Scream — “Some Candy Talking” is the Reids saying “No, no, THIS is what we would sound like if the Velvet Underground were our only influence.”

Lyrically, “Some Candy Talking” is just another fucksong with oral sex overtones, ho-hum, though a DJ in the U.K. somehow mistook lyrics like

for a drug song, and got “Some Candy Talking” banned from the BBC. As for me, I was hardly done playing the shit out of Psychocandy every airshift I had on KFSR before this came out, but I welcomed the addition to the canon.

And “Some Candy Talking” is thrilling, if for no reason that it showed yet another wrinkle in their aesthetic. And especially at the end, as Gillespie hits everything at once, and William Reid adds the fuzz but lays off of the noise while Jim Reid pleads “I want you Candy” over and over again at the highest end of his register.

It was just enough to let me know that they hadn’t shot their songwriting wad on Psychocandy, and already, I couldn’t wait to hear what they were going to do next.