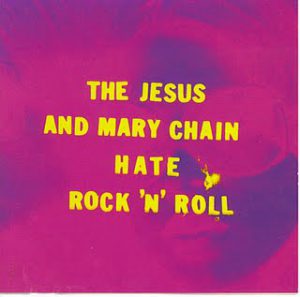 As the centerpiece, title track and reason for the final of the three odds and sods compilations that The Jesus and Mary Chain would turn out during their existence, “I Hate Rock ‘n’ Roll” is a glorious return to everything that made them so wonderful in the first place.

Written by William Reid but sung by Jim Reid, the words of “I Hate Rock ‘n’ Roll” were written by somebody who was clearly fed up with the whole damn thing.

As sung over heavy fuzzy distorted rhythm guitars and a driven by a ringing snare drum(!), this first verse doesn’t even scan as sarcasm, but after that, it turns. Hard.

But here’s the great thing about “I Hate Rock ‘n’ Roll:” after having his brother sing those lyrics, William Reid spends almost two minutes with his stack of guitar effects demonstrating why they doth protest too much.

Feedback, natch. Oh. And more feedback, squealing and whining and skidding out of your speakers and bouncing around the room. But there is also what sounds like a wah-wah solo battling against the feedback and it goes on and on and on for an uncomfortable amount of time until it reaches a point where all of the guitars drop out for a second, and then build and build back into what you assume is the next verse, but no! — it’s even more gloriously screeching noise.

They’re saying both “fuck you” and “fuck yeah!”

And they’re reminding you that they could have done this at any time in the past ten years, but they just chose not to. And the second you have that realization, the whole song stops for a second, and Jim Reid finally comes back in to remind you what they think about your expectations for their music.

“I Hate Rock ‘n’ Roll” the last great statement from a great band, and even though it was recorded (and released) in 1995, it still showed up on their final studio album, 1998’s tepid Munki.

Their final studio album as of this writing, I should add. Because they have their first studio album in nearly 20 years, with the perfect JAMC title of Damage and Joy, coming out in just a couple of months.