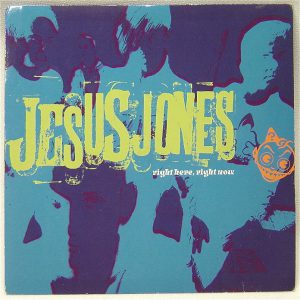 “It’s the Woodstock of the Democracy movement!” Those were the words of Tom Brokaw the night they started tearing down the Berlin Wall right around the time of my birthday in 1989. I have vivid memories of watching it sitting in my living room of my apartment at the corner of Wishon & McKinley, and for that brief moment in time, everything seemed possible.

It wasn’t just symbolic freedom I was watching, but actual literal freedom. And it wasn’t Mr. Gorbachev, tear down this wall,” it was messy joying living people who were doing it. It was reminder that eventually, the human spirit and need to be free and make as many choices as we can for our own lives can eventually conquer technocratic tyranny.

Which is a good lesson to remember right now, I should think. Walls come down.

“Right Here Right Now” was such a powerful thing for me that I didn’t even mind it appropriated that Madchester beat I was only lukewarm on. Nor did I mind that it was obviously made by a bunch of arrogant poseurs, because even arrogant poseurs can get swept up in historical events, just as I did.

And not just me, I guess. “Right Here, Right Now” was a #2 hit single here in the U.S., on the strength of its optimistic, anthemic chorus.

I think I even bought the Doubt album from Ragin, but I don’t remember a damn thing about it.

All these years later, I’m not going to pretend that this is anything more than a great pop song that happened to capture the zeitgeist, but it wasn’t anything less, either.