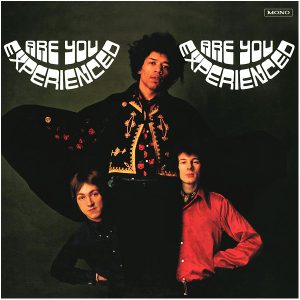 Every other song on Are You Experienced had some kind of precedent in the past.

Except for “Third Stone From The Sun.” It was pretty much unprecedented.

Starting off with jazzy chords and boasting a timeless guitar melody, “Third Stone From The Sun” was probably closest to the space (SPACE!) rock of “C.T.A.-102” or “Interstellar Overdrive.” But, of course, his band’s prowess far outstripped The Byrds, and his focus was sharper than Barrett-era Pink Floyd.

So instead, we got this witheringly hilarious, continually changing acid rush of a song, with squealing guitars swooping over jazzy beats and tape-manipulated vocals guaranteed to have stoners rushing to play the song at 45 in order to make out what the fuck was going on.

Meanwhile, alien invader Jimi Hendrix had a question for us Earthlings:

Strange beautiful, grass of green
With your majestic silver seas
Your mysterious mountains I wish to see closer
May I land my kinky machine?

And of course, it didn’t even matter whether or not we were going to give him permission, as the next section of the song was all about the landing, and of course, one of the all-time most infamous disses in pop music history: “And you’ll never hear surf music again.”

Whether or not that was actually a dis — after all, it was said in the character of an alien who is destroying the world — is immaterial. I couldn’t imagine hearing “Third Stone From The Sun” in 1967 and not suddenly thinking that surf music was a thousand years old.

And of course now, “Third Stone From The Sun” is 50 years old, which in pop music terms is much much longer than a thousand years, and yet it still sounds as fresh, as weird and as unique as it ever has.

“Third Stone From The Sun”