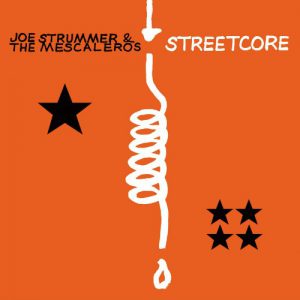 It did matter that his first true solo album, 1989’s Earthquake Weather, sucked, but only slightly: it wasn’t like my Clash records were going anywhere, and at that point I was only beginning to understand Sandinista! anyways.

But outside of producing an incredibly underrated Pogues album — 1990’s wonderful Hell’s Ditch — and replacing Shane MacGowan for a tour (the 1990’s version of Axl Rose replacing Bon Scott), Strummer all but disappeared from my life.

So when Joe Strummer resurfaced with a band called The Mescaleros in tow, I didn’t really pay that much attention. I read the reviews, and they were pretty good, but I think I wasn’t going to take any chances, especially since it was supposed to be musically all over the map. So I didn’t. The second one, either.

Then Joe Strummer died unexpectedly — and of course was instantly canonized — and nearly a year after that, Streetcore came out, an album that was supposed to mark his return to rock ‘n’ roll, but wasn’t yet completed when he died.

Luckily, a couple of the Mescaleros took what were probably rough demos, added the proper backing, and Streetcore emerged, and I went out and bought it. And was pleasantly surprised at how much loved it. Not life-changing loved it, of course, but whatever had kept Joe Strummer from writing coherent rock songs for 20 years had clearly gone away, as most of the songs on Streetcore were more straightforward than anything he’d done in years.

And so with the guitars chugging along and Joe’s voice agreeably ragged, it was visceral thrill when he slid into the chorus of “Arms Aloft.”

With Joe’s voice filtered through an old mic for most of that chorus with the rest of the band massively overdubbed for the title line and an army of guitars, it wasn’t quite like The Clash, but it was a great enough of an approximation that it got right past my head and went directly to my heart.

Sure, he’d already done enough, but it was cool that we had just this little bit more.