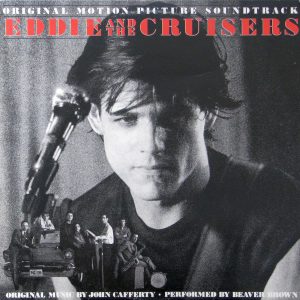 “So whaddya think Bruce? Are you ready to make some real money out here in Hollywood? It’s of course cool to have hit singles — I really loved that ‘Angry Heart’ song — and put out dark acoustic records for your art and everything, but Hollywoo–“

I don’t know if the above conversation actually happened, but I guarantee you that the above conversation was thought about, and so when John Cafferty was offered the same deal — applying some of that Springsteen magic — for a song in film about a missing rock star or something (I’ll confess I’ve never seen Eddie & The Cruisers), how could he pass it up?

Anyways, “On The Dark Side” is the single most shameless Bruce Springsteen rip-off in history — and that includes Bruce Springstone’s “Flintstones Theme“, the Traveling Wilburys’ “Tweeter & The Monkey Man” and The Hold Steady’s hilarious cover of Dylan’s “Can You Please Crawl Out Your Window” — and I love every single craven second of it.

From the piano / echo-y voice intro to the handclaps to goddamn sax solo, there isn’t anything in “On The Dark Side” that isn’t Bruce 101, and yet, when it was re-released as a single in the middle of Bruce’s Born in the U.S.A. single extravaganza, it made the top ten, because that’s how huge Bruce was at the time.

Maybe people thought that John Cafferty was a protege of Bruce’s, kinda like Rockwell was to Michael Jackson or Vanity was to Prince, or most likely, they didn’t care. The just loved the dramatic and buoyant sound of the song.

“On The Dark Side”